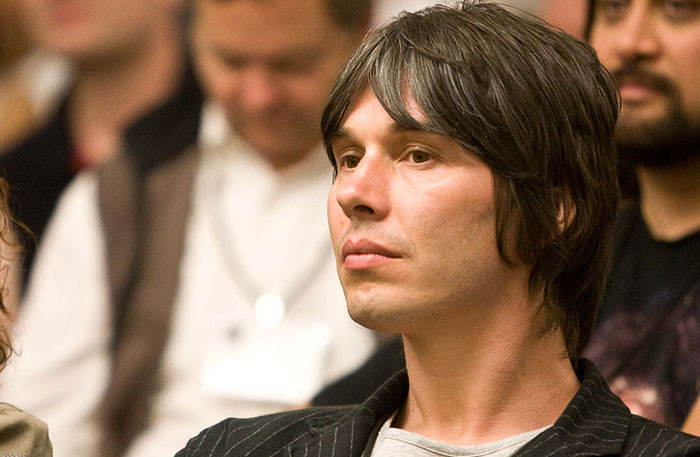 Hi all
Sorry I haven’t written for a while…Been a bit all over the place.
Listeners to my Planet Rock show will know about the weekly sci­ence spot, well next Sunday I have a treat for you if you do..
This morning I finally got to talk to Brian Cox, one of the physi­cists working on the Large Hadron Collider at CERN…(He also used to play key­boards for D-​​Ream, so in his case, I guess things really did get better..)
Holy shit­ting Christ..What a DUDE!! He man­aged to talk about mind-​​meltingly hugely pro­found physics con­cepts with a clarity and sim­plicity that has to be heard to be believed.
(What’s more he does it in a seduc­tively lilting Mancunian accent, more Johnny Marr than Liam Gallagher if you know what I mean, and he’s got a cooler haircut than either of them to boot..)
What the good folk at CERN are about to attempt is simply aston­ishing. On Sept 10th, they will have cooled down the 27km par­ticle accel­er­ator to 2 degrees above absolute zero…That’s colder than the space between galaxies..They will then start firing pro­tons at each other at 99.999% of the speed of light in order to recreate the con­di­tions in the Universe ONE BILLIONTH OF A SECOND after the Big Bang!!!!!!
The idea is to find the so far elu­sive Higg’s Bosun, the so-​​called ‘God’ par­ticle that give things mass, and try to detect why we can’t detect dark matter…I was going into an ecstatic spin lis­tening to him talk about this stuff, and it was all I could do to not jump off my chair shouting “Yippeee!“
He also does it with a keen­ness and humour that is utterly cap­ti­vating, and makes me bit­terly regret having dropped out of Physics at school. (Although to be fair I blame my Physics teacher’s excru­ci­at­ingly long winded and tedious exper­i­ments ver­i­fying Hooke’s Law for that..)
Physics is the big daddy of all the sci­ences, and right now it’s on the verge of break­throughs that are beyond immense, like Biology in Darwin’s time I expect. In terms of making Physics sexy, appealing and acces­sible someone like Brian is worth a thou­sand Stephen Hawkings, and needs to be cel­e­brated as such.
We’ve had Comedy as the new Rock’n’Roll, well let’s make the next one par­ticle physics!
Check out

Also, some of the sci­en­tists have done a rap!! It’s actu­ally a bril­liantly simple expla­na­tion of what they’re up to..

It will certainly be better than last weeks show, which was plagued with mishaps, and I can only apologise to my guest Chris Spedding for the shambles…